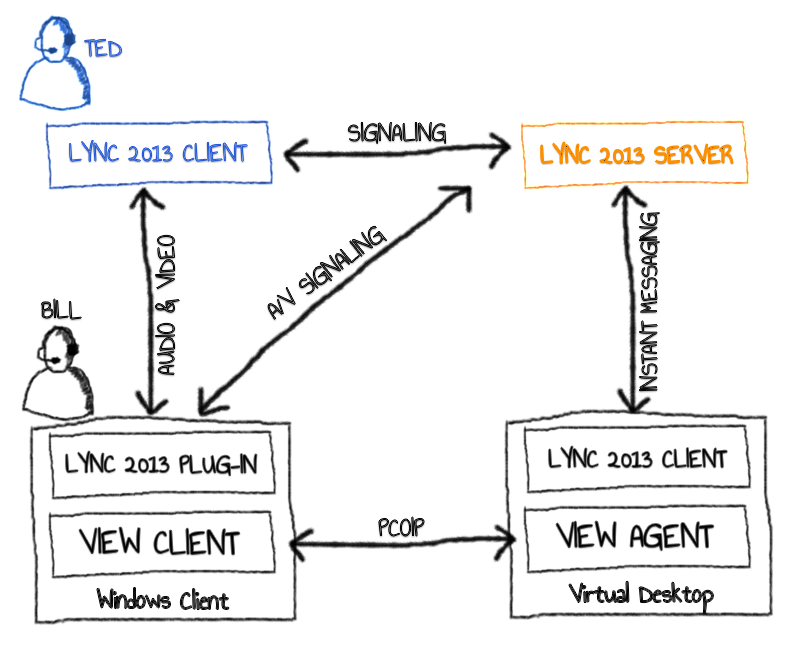 Since VMware Horizon View 5.2 there has been support for Microsoft Lync 2013. In fact when I say ‘support’, I mean that both Microsoft and VMware have both developed the architecture that provides a great user experience. Prior to Horizon View 5.2 only VOIP phones were supported and there were bandwidth constraints that made this unviable and resulted in a poor experience for end users.

VMware have released a whitepaper on Horizon View 5.2 and Lync 2013, and you might also want to take note of KB article 2064266 and 2045726. In addition Microsoft have a Lync 2013 technical resource page which covers the Lync 2013 VDI Plugin. If you’re new to Lync 2013 or VMware Horizon View then this post will provide you with an architecture overview of how Lync 2013 integrates with virtual desktops running with Horizon View 5.3.

In the architecture diagram that I’ve sketched here (above), you can see two users (Bill and Ted) using a webcam and headset with microphone to talk to each other using Lync 2013. The user at the bottom is using a virtual desktop being accessed from a Windows client (PC or thin-client), which will be running either of the following: Windows Embedded Standard 7 with SP1, Windows 7 with SP1, or Windows 8 (Tech Preview). Microsoft haven’t yet released a VDI Plugin for Linux or zero-client manufacturers.

The virtual desktop (shown on the right) that Bill is using contains the Horizon View agent which you’d expect, and the Lync 2013 Client. When Bill launches the Lync 2013 Client on his virtual desktop, it detects the Lync VDI Plugin on his physical client machine and establishes a pairing over RDP or a PCoIP (virtual channel). In fact RDP will work but PCoIP is the recommended approach. At this stage you are required to enter the password again, but this can be saved to prevent it prompting every time.

Any instant messaging is still sent between the Lync 2013 Client on the virtual desktop and the Lync 2013 server, but when Bill establishes a video call with Ted, who is also using the Lync 2013 Client, the audio/video is sent directly from Bill’s client device to Ted and NOT from the virtual desktop. The benefit of this is that the audio and video won’t be sent over PCoIP, consuming valuable bandwidth, and the user experience will be much better if not as good as using the native client. Remember that the Lync 2013 client itself is still communicating with the Lync 2013 server but a large proportion of the bandwidth required for audio/video is no longer being passed back over PCoIP.

If you have Microsoft Lync 2013 Server in place then implementation is relatively simple, but there are some things that can get overlooked. Here is a list of common troubleshooting tips:

I’d love to hear your thoughts on Microsoft Lync 2013 and / or your experiences with using this with Horizon View so feel free to comment below!